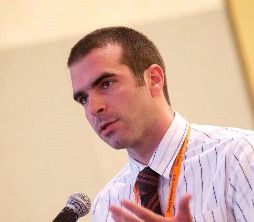 I graduated in 2009 on Telecommunication Engineering by the University from Zaragoza, having completed my Master Thesis at the Lifetronics department from the Fraunhofer IPMS institute. After working for over a year at the Institute for Biomedical Engineering at the Dresden University of Technology, I moved to Berlin to attend the Master on Computational Neuroscience at he Bernstein Center. During this master I carried out successive lab rotations at Humboldt University in Berlin, at Advanced Telecommunications Research Institute in Kyoto, Japan, and finally at the University Medical Center Hamburg-Eppendorf, where I also worked on my Master Thesis in robot cognition and sensorimotor interaction. I joined the IIT in June 2013 to research on manipulation and object affordance learning with the iCub humanoid robot.

I recently started a Marie Curie Research Fellowship with the IIT's iCub Facility. My research interests are mainly connected to HRI. I am working on naturalistic social interaction behaviours for robots. In the past four years I worked at the University of Hertfordshire on the use of robots as companions for children with ASC and the elderly. During my Fellowship at IIT I will work on social interaction behaviours for the iCub.

I am a Postdoc at iCub Facility, Istituto Italiano di Tecnologia. My research interests range from action and activity recognition to robotic grasping.

Ph. D. student at iCub Facility. Interested in perception in general and multisensory integration in particular.